A Meta Data Game is a short exploration game of self discovery.

Explore this adventure and solves puzzles to reveal the truth.

Note: This game has save feature, time to complete 1hour roughly

Save by looking at the mirror. (Doesn't save on web)

From Luis Zuno aka Ansimuz creator of Elliot Quest.

Want to support this game? give a tip or Support me on Patreon

help please! im having trouble finding the temple for the crimson key, but ive acquired the orbs from the other temples alread

THANK GOD! THE UPDATE IS EPIC! Finally an save option you can come back to play in other day and play it agian and agian (but the Sun-Eye won't care how many times you play it... he will be more dissapointed of you wasting time re-play same thing other and other agian but who cares about him) the controller update god... is too good! Luis Zuno... you're too good to be TRUE!

Gosh, hate to ask but because you did so much work but... could you do reset button for the controller, pretty please.

By the way, no lies but I have Eliot Quest on my SWITCH and is the second hardest games I got in my SWITCH (the first hardest is Hollow Knight) I don't know who you are but GOD you're so talented and please keep up the good work.

Thanks, I have updated the game with the restart button. I accept whatever you can throw in the support button. Cheers!

I got the update, I went to the temple and try out the reset button on my controller... I feeling satisfied. Thank you. :-)

HALP! I am stuck on the second temple puzzle. Is there a game mechanic I am not utilizing? How do I get past this? 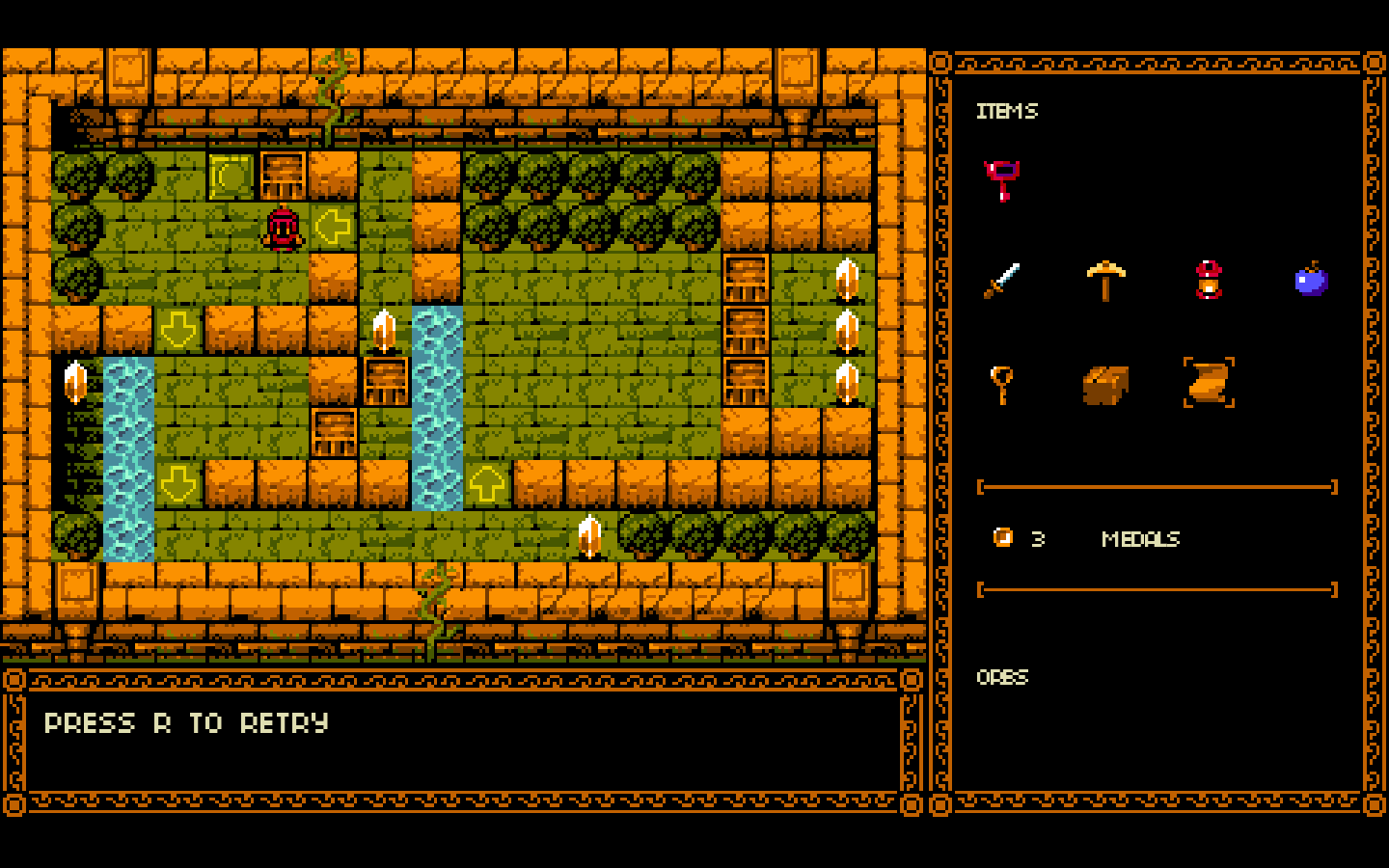 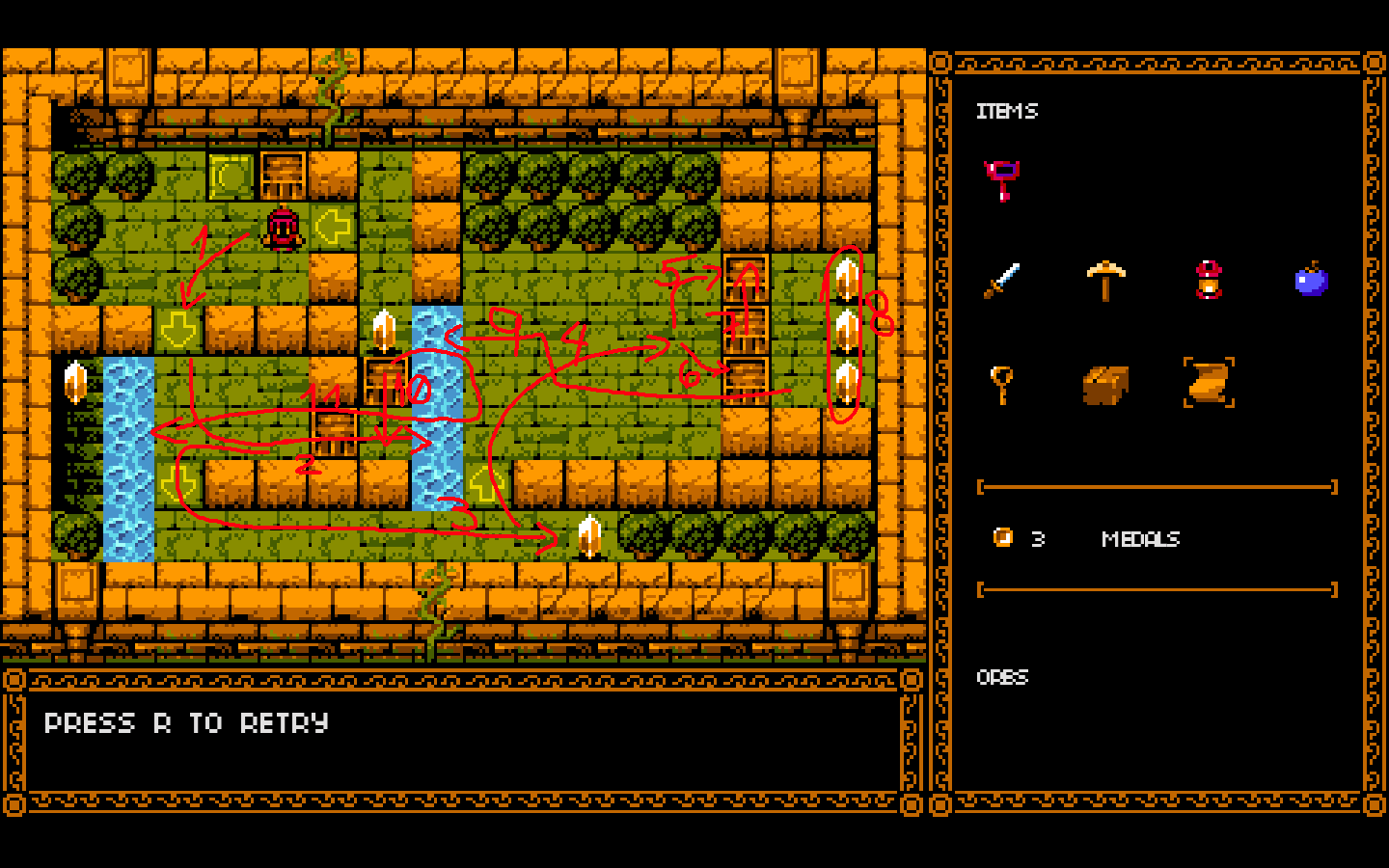 It bugged again at the Blue key dungeon second floor, when i got the last coin , the game just crashed and quit by itself.

When I take the last coin under the skull, three sounds are being played. the collect coin, the BOOM of the skull, and open door sound. Maybe the combination of those crashes the game.. Probably you should change the boom sound of the skull to something else (?) I will try to take coins in another order, and write again.

My method worked. Probably the combination of sounds crashes the game.

Kinda same thing happened at the green dungeon 2nd level. The boom sound is super bugged. I cannot continue to finish the game unless this is fixed. I have restarted like 20 times :P I got tired.

Thanks, For the detailed explanation, I will test it and fix it asap.

Hey, Could you download the test.zip and let me know if the crash happens. It will run the second floor to speed up the testing.

I can't find the test.zip

What do I do with the eye at the end?

I can get the blue orb more than once.

Will fix it thanks.

This is really interesting. I spent the first few minutes trying to find a sword, because there MUST be a sword in a zelda-like game, right? Apparently not. I explored a bit, found some secrets, and eventually got lost in a cave. The darkness effect in the caves is way too extreme in my opinion, give us a LITTLE radius of vision! Unless I wasn't supposed to be in there. I guess the whole time I didn't really know where I was supposed to be.

Really enjoyed this! WELL, was close to finishing, but I think I got myself stuck: 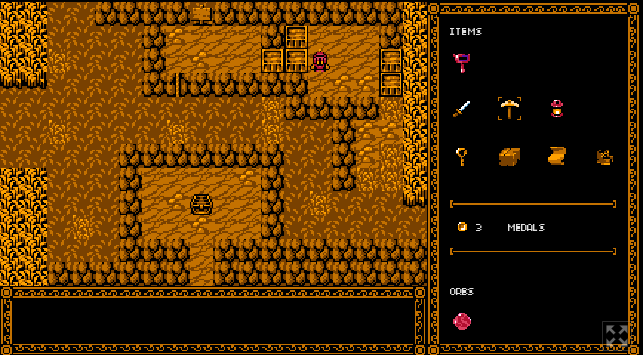 Lol, I didn't have problems the first time, but I was putzing around when I revisited and suddenly realized 'OOP.'

Other than the misstep, nothing else blocked me from enjoying this game. The dialogue is a little stiff or grammatically incorrect in some places ('key is in under the table' was one, where 'in' should have been 'hidden,' I believe), but it also kind of fit the slightly off atmosphere? Reminds me of how people talk in dreams--like you understand it, but you don't realize something's off till after. In which case, the atmosphere of the game was great! I think the amount of puzzles to solve at any given time was just right--they were just challenging enough without being a slog. Hopefully I can finish the game here in the near future! Thanks for this little gem.

Thanks I'm glad you liked it. Sorry for the unintentional lockdown (will fix it). About the grammar I'm not native english and only had one month to make this game So couldn't help it also I wanted to be as cryptic as old games with grammar errors.

Thanks for quick response! As far as grammar, I think what matters is you played to your strengths, and despite the mistakes, it actually worked in the game's favor! Your output's insane anyway--keep up the good work.

Mentioning Final Fantasy is as meta as the game itself.

First of all, I think you should include some epilepsy warning. It had no dramatic effect on me, but I can imagine people having problems with it. Only the skulls gave me a terrifying jumpscares.

I like the mechanical simplicity of the gameplay. You move on a grid, some tiles teleport you, some tiles change if you use an item next to them, some tiles make a dialogue appear, sometimes several depending on the held item. For me this is very adorable.

The visuals are lovely. Pixelart looks very good, and areas have distinct aesthetics. Character style and animation is very reminiscent of Final Fantasy on NES. There is only one melody, but its slightly varying arrangement makes a fine background for the adventure.

The puzzles were a joy to solve. World exploring has numerous obvious references to the first Legend of Zelda. Clues you gain from signs and NPCs are clear and useful, however it is sometimes possible to get a solution by chance before seeing the clue.

The titular Meta element is very striking. It raises a topic I like to think about from time to time. Personally, I didn't like the conclusion, nevertheless I find it rather good.

Thanks for the extensive feedback I really appreciate it. I put the epilepsy warning.

Besides, I ended my first playthrough with 3 spare medals. Are they extra, or there is a thing to spend them on?
Also, when I did a quick replay, I gave away the box first and I couldn't return the jewelery.

Is there anything after the end? I'm just walking around an otherwise mostly black screen. Is something more supposed to happen or is that it and I just close the window?

edit: Enjoyable game, by the way. Thanks!

That's it nothing hidden. Thanks for playing.

This game is amazing! I have a terrible soft spot for (NES) pixle games and 'Legend of Zelda' type game-play! However, I would like a controller updated please... the game can be played with a controller like my example is my 8BITDO GAMEPAD - Recommend buying it ;-)

works with the game, I can walk with the d-pad use 'Y' to interact with things but switching items I still have to use the computer; it would be nice to have a option menu to customise the controller, but that it. I recommend download this game if you like puzzle games! (I just realised that I'm recommended a game that people probably already downloaded and played it... I'm a huge dummy)

P.S. I got a problem... I can't find the last medale in the game, I not sure if it's because I bought the boots first than the bombs or I am just blind! Please help... :-(

I can't to play...when I Run The Game this message is show: "Cannot read property 'getParameter' of undefined"

In What platform this happens? When does it happen?

can't find the key for the cornmaze tower: suspect that one of the 15 medals I have collected was supposed to be this key instead.

Visit the sage with the letter

I thought I had tried that map with every character already, but thanks.

can i use a controller with this? i would prefer a d-pad to the arrow keys:)

#bug 1 , the sage returns to the cave even though i gave him the sword and got the sword back.

#bug 2 I got hit by the skull , and now I am softlocked. I wish the game has some save/load now i have to go from the beginning......

Note; Even if i press R for restart, i cant move. Rip 1 hour progress.

The sage error is fixed. I'll look into the skull bug. I still learning Godot will try to add a save feature soon.

Thanks for the feedback.

I think I found a bug with the sage

Please elaborate if you can.

After I gave the sword to the sage, I exited the cave, but when I came back in, the game froze... Just black screen, nothing more

Thanks I'll look into.

Same thing happen to me but different scenario.

After I got the orb, i bomb the barrel and went to the cave then it went black screen.

cannot open: is the pck missing?

Oh, you are right. Just fix it. Try again. 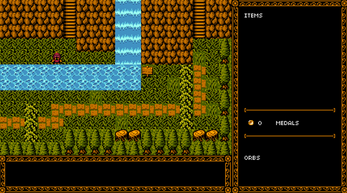 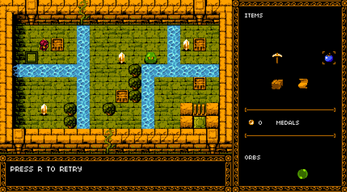 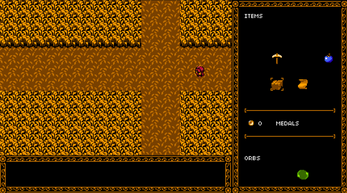 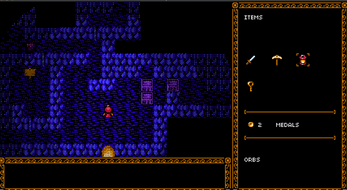